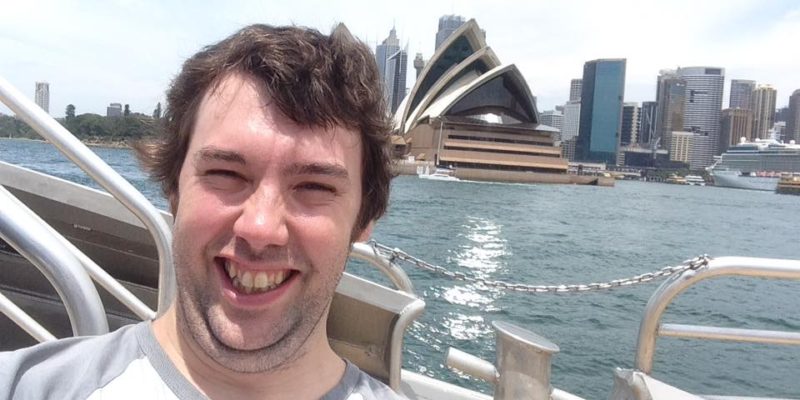 Another week has passed of my Australian adventure. I’ve actually just had three whole nights off which has been quite nice I must admit and a chance to be a tourist for a bit and catch up on sleep. On Friday I flew into Sydney from Perth at 5.30am (that was really nice) and drove straight to Illawarra Folk Festival where I played an hour or so after my arrival on site. It was a cracking little gig I must say and handily positioned in the middle of the site so by the end the tent was pretty heaving. I then hung out with some new chums that night and watched some fine music before retiring at a reasonable hour to catch up on sleep. Thanks so much to Barbara and Ian for ‘billeting’ me. Incidentally, that means accommodating me and I had never heard the term before it was introduced to me on my New Zealand trip back in 2014. I thought it sounded rather too much like ‘guillotine’ but I am now familiar with its meaning. I had a lovely time at their house and they had a cracking little dog called Buddy who  mysteriously seemed rather fond of me.

Next up was two more sets at Illawarra, the first on the Saturday which was mostly quite good aside from two slightly (and by slightly I mean very) drunken ladies who felt the need to talk quite a lot while I was doing my introductions. It really helps. Likewise saying ‘stop’ while they were dancing to my last number which is a set of reels that gets faster and faster. That really helped too. After all it was all about them. I know, I shouldn’t be so hard on audience members. But some just give you the ammunition…

Anyway next came the indescribably wonderful Humph Hall in Sydney which was an absolute delight and a wonderful audience augmented by the presence of some old friends Isla and Dave. I should say it’s been positively reunion-tastic on this trip – Kira in Perth and Ruby in Canberra made it four old friends from my Newcastle days I’ve seen out here! Wayne and Gial who run Humph Hall are simply fantastic people, really amazing actually. They work so hard making this cracking little venue (which I should mention is in their house!!!) tick and even go to the trouble of filming high quality videos to put on youtube as well. Here’s one from my set: https://www.youtube.com/watch?v=JTMsxFx2apg&t=185s. They also run numerous community related things. All round superb people and they happily put up with having a banjo player stay for two nights as well. Wayne and Gial, I can also say we touring musicians are so grateful for people like you. I don’t think we could do this otherwise.

So then it was just a couple of days being a tourist in Sydney and then Canberra. Photo below, the cheesy tourist shot! I even managed to get told off quite rightly by the ferry driver. There’s a quick ferry ride from Manly over to the centre of Sydney and I was snapping away as the Opera House and Harbour Bridge hove into view. A very polite young man came out of the drivers cabin and said ‘mate, do please take all the photos you want but could you just move down to the lower front portion of the boat ’cause we kind of need to see you know’…Fair point.

Now then. Australia has proved delightful thus far with sunny beaches, lovely people, (some) decent beer, particularly fine hot chocolate, lovely gigs with delightful audiences and much more. Driving here is an interesting one – not as hateful as the UK by any means with fewer cars although traffic lights are plentiful and good god do they take a long time. But all of this is quite easy to cope with. One thing I have struggled with however is how phenomenally unaccommodating Australian drivers really are. I mean in the UK, if you’re in the wrong lane and you stick your indicator on usually some nice soul lets you in and you greet them with a cheery wave of gratitude. Reasonably often the first driver does not let you in and you mutter something about people born outside wedlock but then the next car lets you in instead and the cheery wave procedure gets underway. Here…that does not happen. Really, it just doesn’t happen. They just will not let you in. Ever. Ever.